You're probably familiar with DOCSIS. Now, brace yourself for FARMSIS.

That's the label affixed to a new set of CableLabs specs focused on rural markets and the delivery of broadband services via fixed wireless access (FWA). FARMSIS, more proof that the cable industry has yet to meet an acronym it didn't like, is a new set of PHY-layer specs that can be tied to existing DOCSIS infrastructure. CableLabs quietly issued the specs on December 16, 2021.

The general aim of FARMSIS, also known as the Fixed Wireless for Rural Broadband PHY Specification, is to enable cable operators to efficiently and cost-effectively use FWA to bring broadband to underserved and unserved areas – a hot topic in the wake of various federal and local programs focused on bringing broadband to rural America.

"Delivery of Internet services is critical for connecting individuals and communities in rural areas," CableLabs notes in the intro of the 28-page document. "Bridging the digital divide is not just about bringing streaming video to rural subscribers. It also brings education, 'smart' solutions, and a necessary pipeline of local, national, and international awareness."

FARMSIS strives to be agnostic with respect to spectrum, but the specs point to three popular choices: 3.5 GHz (CBRS), the low-power/short-range ISM (Industrial, Scientific, and Medical) bands (such as 2.4GHz and 5GHz used for Wi-Fi and some sub-gigahertz bands), as well as television white space (TVWS) – unused spectrum between over-the-air broadcast TV stations.

Those bands, CableLabs points out, fall within the forward range DOCSIS PHY specs for DOCSIS 3.0, 3.1 and 4.0. However, FARMSIS adapters aren't limited to operating in those bands, as they could also be made to support other licensed or unlicensed bands with "minor changes," the specs note.

CableLabs points out that installations of directional antennas on a tower directed to rural areas and the use of home-side receiving equipment tend to be expensive, can be saddled with pricey truck rolls and, on occasion, require additional devices for in-home Wi-Fi. "The rural nature of these deployments only adds to the expense of the solution," the specs read.

With FARMSIS, the idea is to reduce installation costs and truck rolls by using the existing cable infrastructure, supply chains and cable modem hardware. Along with that aim, the specs define wireless adapters to connect to a fiber node to deliver cable connectivity to a cable modem outfitted with a wireless adapter that can be attached via an F-type connector.

"It effectively extends the cable network wirelessly to deliver services to homes and communities where a hybrid fiber-coax (HFC) network is not possible or is cost prohibitive," the specs explain. "In addition to delivering rural broadband, this solution could also deliver services such as voice and video."

The specs intend to extend the cable plant's PHY layer to rural subs at a "low cost to operators," but the document doesn't get into any specific cost targets. That'll be left to the vendors and operators to iron out.

FARMSIS specifies the wireless element of the cable modem and the fiber node, which can be developed as separate components or built into the node or modem themselves. The new specs don't alter the requirements of the DOCSIS specs or define the electrical properties of the wireless components.

FARMSIS also sets a goal to utilize spectrum for two-way transport from the network to a wirelessly-enabled cable modem at a distance of up to 2 kilometers. CableLabs holds that the 2-kilometer range will keep the cost of adapters in check and "ensure the availability of enough link budget to potentially support a self-install."

The FARMSIS specs acknowledge that further distances could be achieved with the use of different frequency bands, amplification, antenna types and antenna placement.

Drilling down into the product types referenced in the specs, the fiber node wireless adapter is different than a standard node in that it will require "much less expensive components" and will require a smaller amplifier that only requires support for a narrow band, according to the specs.

Click here for a larger version of this image.
(Source: CableLabs FARMSIS specifications)

But the adapter can be made to fit into various types of fiber nodes, including those based on the industry's RF-over-Glass (RFoG) standards. Developed more than a decade ago, RFOG is used to deliver RF-based services over fiber-to-the-premises (FTTP) networks, but relies on legacy cable modems and set-tops and back-office/provisioning systems.

The FARMSIS cable modem wireless adapter will be made to be modular in that it can be attached to various DOCSIS-capable customer premises equipment (CPE), including cable modems, digital transport adapters (DTAs, used to flip digital signals to analog for older TVs), as well as certain set-top boxes. 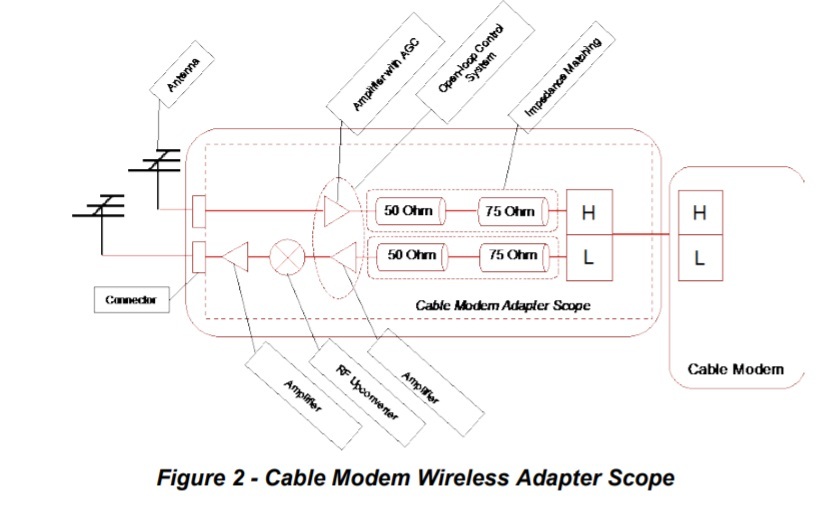 Click here for a larger version of this image.
(Source: CableLabs FARMSIS specifications)

The specs envision a self-install model whereby the customer would need only to screw the adapter to an F-Type connector, attach antennas, and plug the adapter into an AC power outlet. Again, vendors might want to bake this wireless adapter into the cable modem itself.

Though the FARMSIS specs are brand new, the cable industry has been pursuing them for some time. Per the agenda of the CableLabs Mobile Summit on fixed wireless access held last May, the organization provided a technology update on FARMSIS, which has joined CableLabs's array of trademarks.

Cable operators have been active in fixed wireless access well before these new specs arrived on the scene.

Among examples, Mediacom Communications has launched Mediacom Bolt, a fixed wireless service focused on rural or hard-to-reach areas that's delivered on CBRS spectrum. Cable One has invested in two wireless ISPs – Wisper Internet and NextLink – as part of a plan to use alternative technologies to reach less dense areas nearby its wireline footprint.

Charter Communications intends to use CBRS in high-usage areas to help offload MVNO costs, but the operator has referred to FWA as a potential use case for CBRS.

CableLabs tells Light Reading that the organization does not have any FARMSIS interops slated for 2022 nor any plans underway at this time to run official certification testing on FARMSIS products.

"As with other CableLabs specs, it is now up to industry vendors to choose whether or not they plan to develop Fixed Wireless for Rural Broadband (FARMSIS) products that align with the specification. Then, cable operators may choose to trial and potentially deploy a FARMSIS solution," CableLabs said in an emailed statement.

FARMSIS, CableLabs added "is just an initial first step for rural broadband and one of many options to deliver megabit services to rural areas."

Several cable tech suppliers that are logical candidates for FARMSIS appear to be up to speed on the specs, but those reached by Light Reading couldn't say when or if they'll come out with FARMSIS-based adapters or integrated products.

Colin Howlett, CTO of Vecima Networks, noted that FARMSIS is generally not a new concept, but one that's been refreshed for the capabilities of OFDM (orthogonal frequency-division multiplexing) in DOCSIS 3.1 and the use of TV white spaces spectrum.

But Vecima, he points out, has already been working with cable operators to offer fixed wireless via its new EN9000 node, which is compliant with the new SCTE Generic Access Platform (GAP) standards. That device, he said, can support multiple access network technologies (via plug-in modules), including Wi-Fi, DOCSIS, 4G, 5G and even proprietary fixed wireless systems.

Casa Systems, a DOCSIS network supplier that's now fully invested in mobile and wireless, has been participating in the FARMSIS working group sessions. However, the company, a supplier involved in Mediacom Bolt, has yet to add any FARMSIS products to its roadmap, a Casa official said.

ATX Networks is likewise aware of the initiative and was, at one point, participating in it. "We're monitoring it but at this point our focus on helping operators serve rural communities – in support of RDOF and other public funding initiatives – is concentrated on digital optical transport and our GigaWave portfolio of products," a spokesman said.

A CommScope official stated that FWA "has made tremendous strides, making it a viable broadband access option for both rural and urban areas," and that the company can tailor or adapt its technology as needed. But the company isn't discussing where or if FARMSIS falls on its product roadmap.